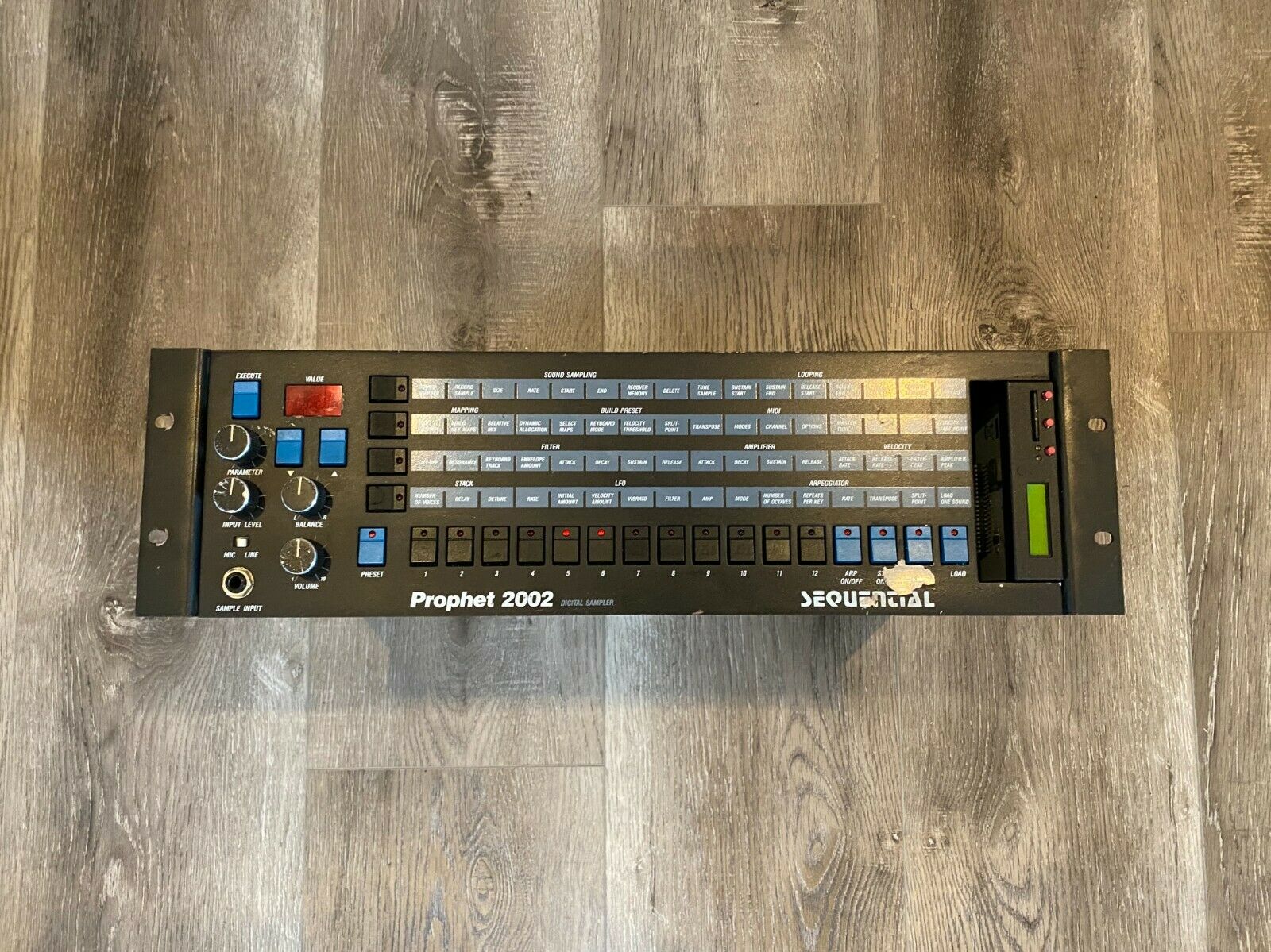 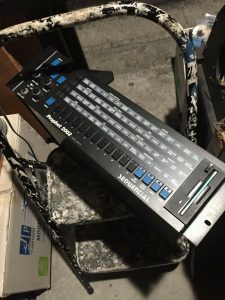 “I turned it on and ran through some of the switches, buttons and knobs and everything responded affirmatively. You can see in the pictures that different lights are lit/ Plus it goes to 11. The floppy drive seems to work but I have no way of testing it. THere is also a disk that has some files, but as I gave away my MacPlus sometime last millennium, I have no way to see what else is on it. But as far as I can tell, this unit is very clean and is in Mountain View, CA just 10 miles from where the Sequential Circuits products were manufactured. ” Click here to visit listing on eBay 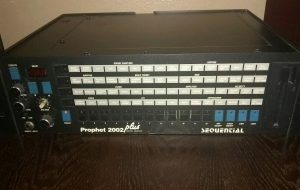 “Sequential Circuits Prophet 2002 Plus Digital Sampler Synthesizer Rackmount version of Prophet 2000. Has analog filters. 12 bit resolution in an age of 8 bit, this thing was Ace in it’s day and still a strong tool for sound design.
Sequential Prophet 2002 Plus is with the upgraded memory and individual voice outputs. Including a printed and bound manual, IEC power cord. No wall wart or bulky brick!

Used condition is:
Minor scratches and rash and slight bit of paint splatter on one side, also missing one knob on the balance control but all of this was purchased this way. All functions work with only one particular quirk: the switch on the back that provides midi thru/out select wore down and broke off but has been adapted with jumpers accessible by opening the unit. Disk drive is great and have successfully formatted disks to ensure all is working well.” Click here to visit listing on eBay

“This unit was originally owned by composer Jim Johnson of the WWE. This sampler was used in Jim’s studio for years making it onto many of his recordings. The Sequential Circuits Prophet 2002 is fully functional and in very good condition overall.” Click here to visit listing on eBay

“Good shape, everything works, some physical wear is evident. There is some rust around the holes for the rack screws and a few minor scrapes in the finish. There is also some residue on the bottom, where there may have been rubber feet? The pictures give a good indication.

I just today tested loading and playing sounds, as well as all the buttons and knobs. All controls and lights are functional. The disk drive has been replaced years ago, and it does work. The new drive is smaller than the original, so there is a gap between the drive and the control surface of the sampler. This is shown in the pictures. ” Click here to visit listing on eBay

“Prophet 2002+ sampler (upgraded from baseline 2002 model). Cosmetically it’s seen better days. Function is perfect. The + version has 8 outs and twice the RAM. HxC floppy Emulator installed. I will include external USB floppy drive and a stack of floppies from original owner. I should also have original floppy drive but message me if that’s a deal breaker. ”
Click here to visit listing on eBay

“It is in nearly great condition as you can see from the photos. Comes with two original disks, a handful of custom disks of my own, and digital copies of dozens of disk images. This particular sampler has had the 512K memory upgrade installed. There is a software editor available online.

Schematic and service manuals are available as PDFs, however this unit is in perfect working order – checked it out yesterday.

I believe this sampler is a hidden gem, sounds just as good if not better compared with EMU Emulator II. Feature and sound-wise one of the best designed samplers and sound quality. It also has a very nice MIDI arpeggiator that is unique. Leave it to Dave Smith for the ingenuity of this beast.” Click here to visit listing on eBay

“Here is a Sequential Circuits 2002 rack mount sampler in good condition. Works and sounds awesome, this is a classic 12 bit sampler” Click here to visit listing on eBay

“EXCELLENT working and physical condition! This unit shows minor/normal signs of being used or racked, with just a few very light scratches. Overall it is very clean! This unit is expanded to the max 1 MB memory, and has the optional 8-audio output kit installed. Original manual, several Wine Country and misc. sounds disks included. No returns.” Click here to visit listing on eBay

“EXCELLENT working and physical condition! This unit shows minor/normal signs of being used or racked, with just a few very light scratches. Overall it is very clean! This unit is expanded to the max 1 MB memory, and has the optional 8-audio output kit installed. Original manual, several Wine Country and misc. sounds disks included.” Click here to visit listing on eBay

“Vintage from the late 80s sequential circuits rack mount sequencer sampler. Cosmetically has old masking tape and some scratches. Powers up, buttons seem to work, but right now it says inf when I try to load a disk. Not sure if it is the disk or the drive. It did play back it’s preloaded internal sounds when tested. Sold AS IS.” Click here to visit listing on eBay

”
This vintage Sequential Circuits Prophet 2002 Digital Rack Sampler is a previously used piece of vintage musical sampling gear. It was previously used in studio situations. This unit powers up and comes with power cord. All the pictures seen are exactly what you will be receiving and is being sold “as is”
It also has an extra box of discs that will be shipped with it. 1 day turn around for shipping.” Click here to visit listing on eBay

” Rare/Vintage Sequential Circuits Prophet 2002 Digital Rack Sampler. Look at all the pictures, you get EXACTLY WHAT IS SHOWN. Power cord included. No refunds, no returns. ” Click here to visit listing on eBay

In reasonable condition with some signs of use, check photo’s great modular unit capable of some excellent 80’s sounds.” Click here to visit listing on eBay

“This is like a hybrid digital/analog sampler, because it has 8 analog curtis filters. So you can load analog synth waveform samples into it, and with the filters you have a very analog sound. There are separate envelopes for VCA and VCF, and an LFO with lots of stuff that you can use it for, as well as a pretty cool arpeggiator. 12 bit sound but it’s like a fairly high quality 12 bit sound. So the sound is actually kind of unique just on the digital side.

The disk drive does work! Included are several disks, with a nice variety of sounds on them. I remember having trouble with getting at least one of them to load properly but most of them do load. 10 are new disks I bought and copied some other disks I had onto them, but 3 of those new disks are BLANK, so you already have all you need to start sampling your own sounds! i imagine you might find a few of the disks with things on them to be not to your tastes and you could use those for your own sounds as well. i’m going to list what is written on the labels of the disks, which sometimes tells you a good idea of what’s on it, and other times is kinda vague. One of these is an official disk from sequential themselves (the first on the list):
Sequential Sound Disk Model 875-03 revB – includes- Acoustic Guitar, Organ, Electric Bass, Slap bass, and various layer setups with combinations of those

these are disks i copied myself onto new blanks:
a copy of a prophet sound disk with- grand piano, muted bass, wah piano, honky tonk, and lots of other variations
a copy of a wine country wurlitzer electric sample disk
copy of a wine country moog disk
disk with an accordian
one with a cello
one with acoustic drums+bass
one with strings and brass
and again there are the 3 blank ones” Click here to visit listing on eBay

” Sequential Circuits Prophet 2002 is a classic digital analogue hybrid synthesiser / sound sampler. The synth case condition is reasonably good except for a few of minor scratches and scuffs. It is in full working order, all buttons and knobs work, all inputs and outputs work, the disk drive works. All eight voice channels work, the sampling system works. I bought this synth from Mark Kelly, the keyboard player in the band Marillion in 1988 it has only had light, studio use. The synth was completely overhauled not long after I bought it.

The synth was upgraded by Mark to the SCI 2002+ standard with the full 512k (12bit) memory expansion and double sided disk drive. It dates from late 1986. The firmware has been updated to the final revision release. It comes complete with the owner’s manual and a cd copy of the circuit diagrams from the service manual. There is a library of sounds on disk that includes the usual standards (Choir and Strings, Piano and Bass etc..) but also some great Moog and PPG samples..” Click here to visit listing on eBay