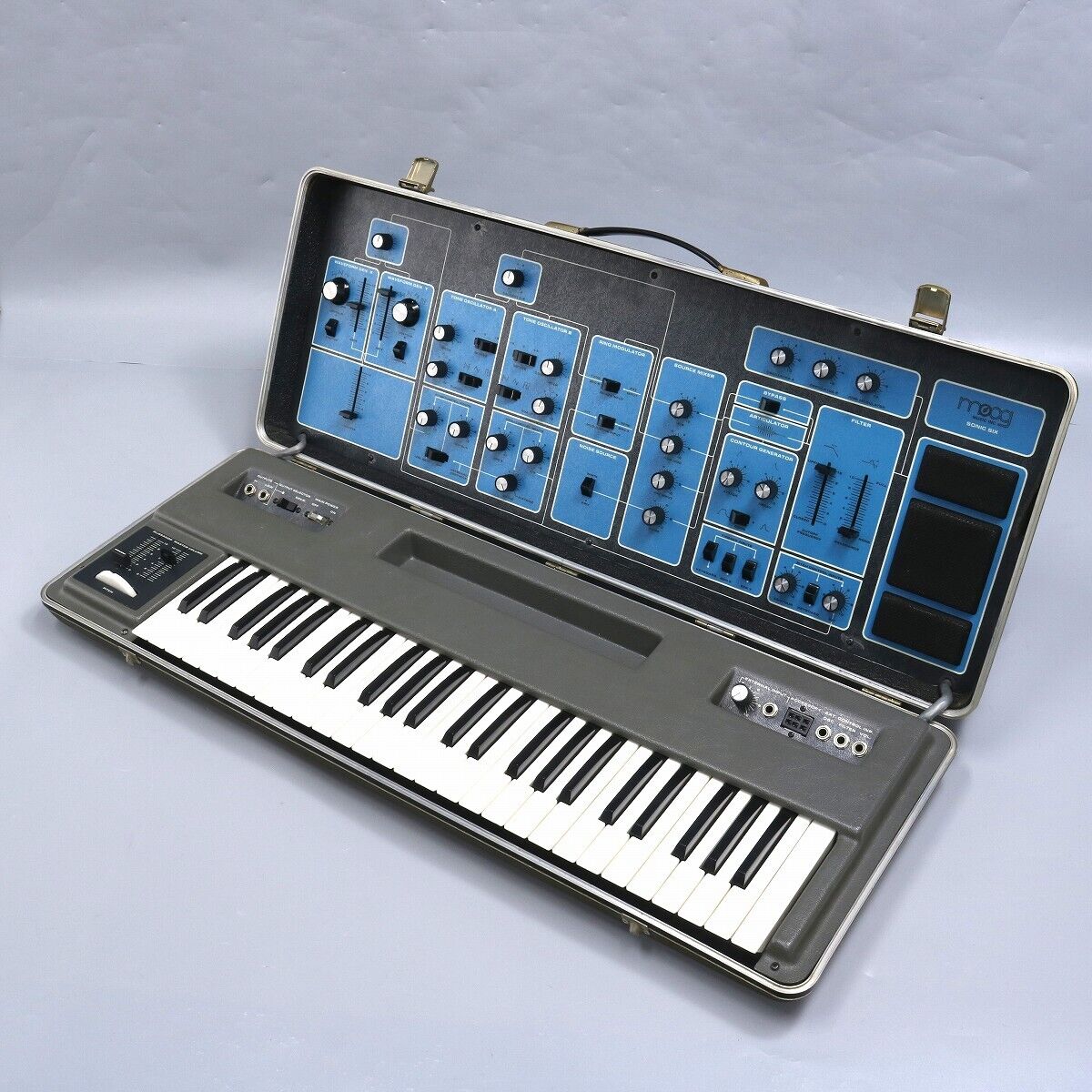 This model was released as a model for school education, and its biggest feature is its trunk-shaped chassis. The top part contains the synthesizer and the bottom part contains the keyboard.
Speakers are also built in, and the sound can be played by opening the lid and connecting the power supply.

Originally designed as an educational model, it is more like a voice synthesizer/oscillator than a keyboard, requiring a knack for sound creation. It has two modulation systems and a ring modulator, and can be used for duophonic or two-note polyphony, which is rare for MOOG. Of course, it also has outputs, and if you connect it to a high-quality speaker, it can reproduce the strong bass sound characteristic of analog synthesizers.

It has been maintained by a specialist.
Glissando knob has been replaced. There are repair marks on other knobs.

Item rank: B: Fairly scratched and used, but no problems in normal use.
Case:No
Manual:No
Other accessories:AC cable
Remarks:Other accessories are only those shown in the picture.”
Click here to visit listing on eBay

The electronic’s were restored By Richard at EPR in 2014 ( see invoice copy ). All parts that were replaced were kept and will ship with the synth.

All the key bushings were replaced by me.

The origianal owner named her “Magus” which you can just see on the cover still.

One of the rubber feet was replaced ( see photo ) and one of the internal board hold downs was replaced by wood ( perfectly functional .”
Click here to visit listing on eBay

“We fully refurbished this Sonic Six. This was an investment of 29 hours of skilled vintage synth tech time. There’s a huge difference between the working condition of this instrument and most of the others that are out there. Ours works perfectly and is a pleasure to play, no excuses. It tracks the keyboard well, which is more than we can say for most others you might find. This unit was fully disassembled and cleaned inside and out. The keyboard bushings were removed and replaced with brand new ones. The key guides were adjusted. All contacts were properly cleaned. All keys were removed and cleaned. Key heights and spacing were adjusted. Some keys were polished. Some screws were replaced with new ones. Replaced all electrolytic capacitors. Cleaned and lubed all potentiometers and switches. Cleaned all jacks. Replaced jack nuts and washers. Replaced trimpots. Recalibrated. Justifiably priced higher than the lesser examples being sold by amateurs who didnt invest nearly 30 hours restoring theirs to work like new again. ” Click here to visit listing on eBay 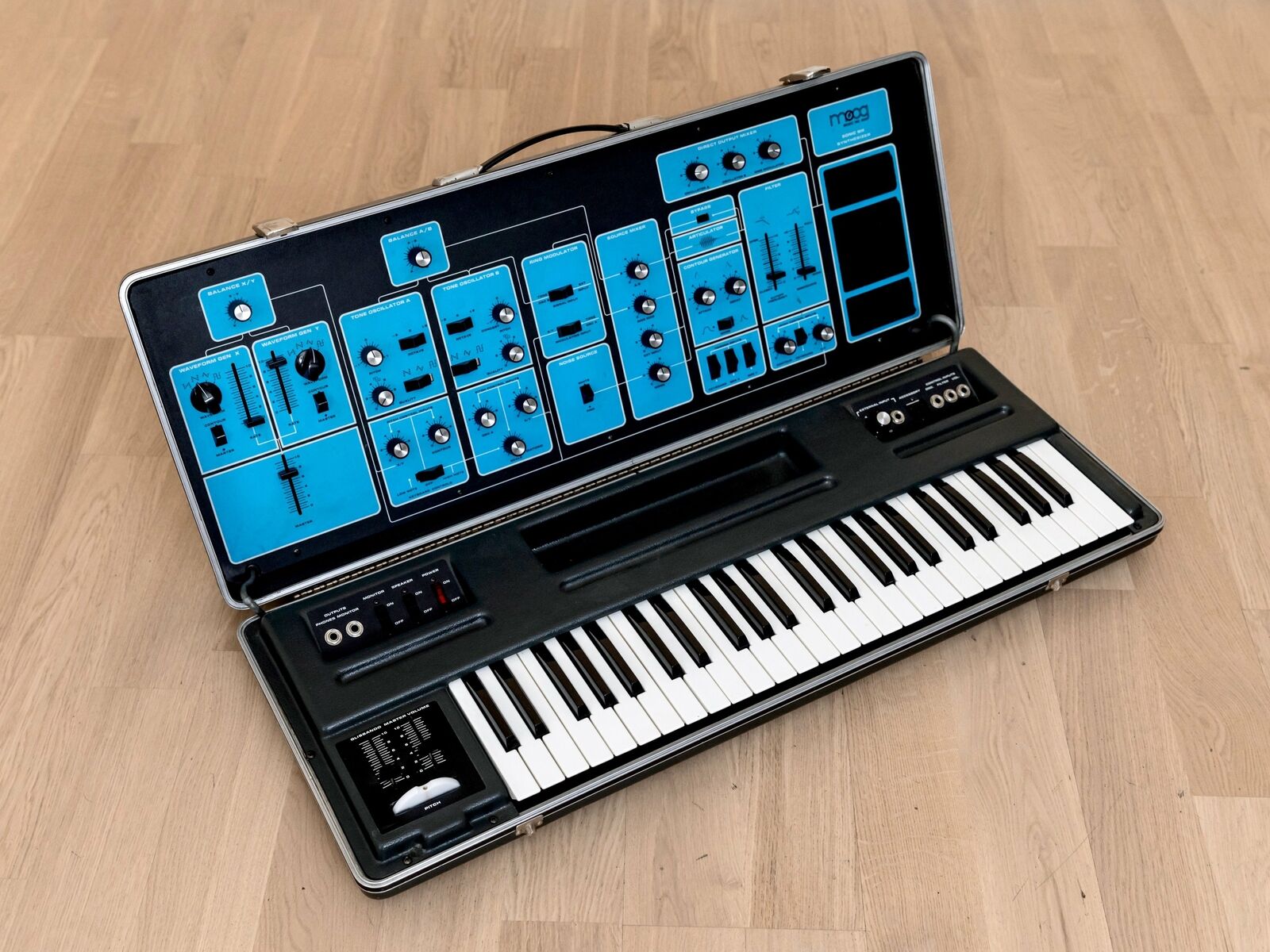 “This Moog is exceedingly well-kept, with all original knobs and slider tips, and an immaculate control surface and keyboard. There is sparingly little wear on the aluminum-trimmed ABS plastic molded save for a small spot of localized scuffing on the lid.” Click here to visit listing on eBay

“You are bidding on a used Moog Sonic Six analog synthesizer. This unit was built in 1974 (as dated inside). It is in very good cosmetic condition for its age with some scratches and scuffs from normal use. Everything works! All switches and faders have been cleaned. All music wires have been polished. Synth comes complete with power cable and original owners manual. ”
Click here to visit listing on eBay 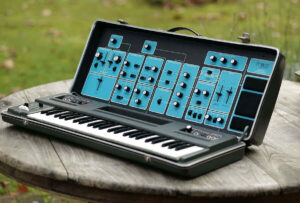 “It is in fully functional order and in good condition.” Click here to search for synths on eBay 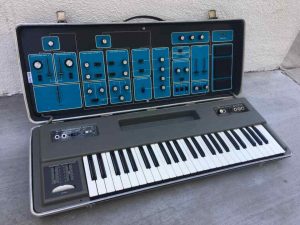 “PLEASE READ THE FOLLOWING DESCRIPTION CAREFULLY, I’m going to try and explain the state of this synth as best as I can:

So, this thing was an impulse buy that I made pretty dang recently. It set me back a cool $1500 plus tax.

This unit is serial number 1126, which was written on the plastic film on the front panel. The plastic was separating and had to be removed. I put the serial number back with a label.
It is a very early Sonic Six with a build date of November 7, 1972, as-per the inspection sticker hidden inside the keyboard section.

It was found untested, as-is, at an estate sale in western New York State, then it was shipped to me in California. I figured I’d take a big risk and see if it had any life left in it. Once it got here in one piece, I sourced a replacement power cord, and tested it out. It powers on and makes sound, but well… it’s not a happy camper right now:

Upon powering it on, all I initially get is a high pitched whine if I bypass the filter and contour (envelope) -It would seem the RIGHT side of the front panel is non-responsive, but the LEFT side of the front panel is showing signs of life and the controls (more or less) do what they’re supposed to do. I was able to play with the dual LFO’s when routed to pitch. The internal speaker does work, and the volume and portamento controls seem to work as well.

The keybed still has nice key action. No clacky keys, and it seems to be tracking notes somewhat, but not in a musical way. Every key seems to at least change the pitch.

What I did:
I tested it, took a look inside, and got the cobwebs and skeletons out. Looks all-original) No rust or oxidation, and no missing parts (as far as I can tell). The PSU looks fine visually, but probably needs new caps. (there are two big ancient ones)

I haven’t tested the PSU for weird voltages or anything. There was a crusty plastic film covering the entire front panel and some of the switches on the keyboard, but I got most of it off.

I did have to replace some screws. The ones that secure the keybed assembly on the bottom are new. The ones holding the front panel in place were already there, but they are not a perfect fit. One slider cap had a crack in it and it won’t stay on, but I will include it, along with a couple metal clips that I found inside.

Cosmetically, it’s pretty decent. Some scuffs, dings, and scratches, but nothing absolutely terrible.

Long story short: it powers on, it makes …SOME sound… but it’s not working properly and needs to be looked at and serviced by a professional tech who knows how to work on vintage synthesizers. I don’t know what it needs, but your favorite tech might! Sold AS-IS in vintage non-working order and no returns. ” Click here to search for synths on eBay 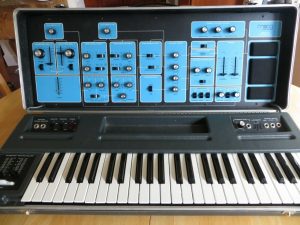 “Missing power cord, but it has been tested and does power up. Limited functionality but viable for parts or refurbishment. Sold as is.” Click here to search for synths on eBay 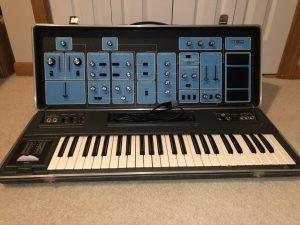 “Moog Sonic Six – Vintage Analog Suitcase Synthesizer. Condition is Used. All parts working, could use some minor sound improvements and internal cleaning. All sliders, switches, and knobs are fully functional. Works totally fine in all departments but some minor adjustments wouldn’t hurt. Amazing physical condition, will be cleaned before shipping. Very rare piece.” Click here to search for synths on eBay 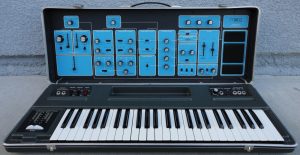 “This one is in good cosmetic condition in my opinion, but it does have plenty of scratches and scrapes on the exterior of the case. It has just arrived back from being professionally serviced with some restoration and is working 100%. This one is fully functional and ready to be used so please buy with confidence.” Click here to search for synths on eBay 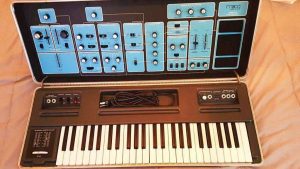 “In Excellent Working and cosmetic condition. It has 5 missing sliders. Works Great. This has been sitting inside of musician’s house for approximately 40 years.” Click here to search for synths on eBay 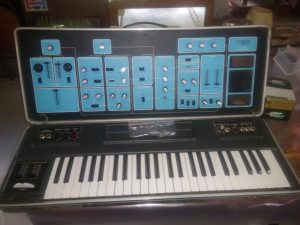 ” Moog Sonic Six – Vintage Analog Synthesizer not in working condition some pieces have fallen out in a bag that will come with the item for sale. No power source cord so i cant even tell if it fires up so i have no idea what function and what doesnt but i figured it could be restored or used for parts but just know before purchasing this item i am gonna assume nothing functions since i have no way of testing it thanks for looking and look at pictures for any damage and condtion issues” Click here to search for synths on eBay 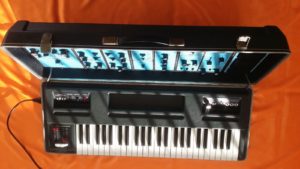 “This Sonic 6 is in exceptionally good cosmetic condition and 100% FULL working order.

All switches, knobs, LED’s are in full working order.” Click here to search for synths on eBay