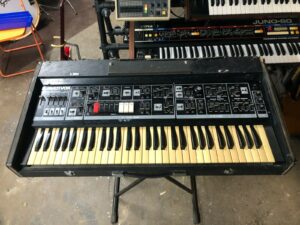 “When it was working better it was sounding great.

This one is going to need to a lot of tlc but it’s super rare and totally worth the investment.

It has some pitting on the front panel but it’s still intact.

The tolex is peeling and it would look great redone.

The cover for the front of the keyboard is included and it good shape.

The metal trim that goes around the end caps is missing.

The power cable is laughable.

You’ll probably want to replace it right away.” Click here to search for synths on eBay 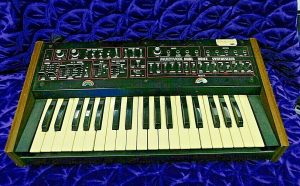 “This is really cool. You are looking at a Vintage 1978 Multivox MX-75 Synthesizer Keyboard. Awesome Sounding and Playing Synth. Made In Japan.

Unlike other Multivox/Hillwood synths you never seem to see the rare MX-75 for sale.

The Hillwood Pulser was developed and built by Hillwood (aka Firstman) in Japan. These synths were then rebadged as Multivox and sold in America. This is a very early example: the Multivox name was on stickers placed over the Pulser name on the front and back; later examples had Multivox painted directly onto the case.

This synth has some scratches on the case but other than that is all-original and in 100% working condition. It sounds amazing. ” Click here to search for synths on eBay 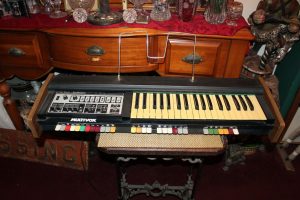 “Hello, you are viewing my auction for a Vintage Multivox MX2000 Duo Synthesizer Dual Oscillator Vintage Keyboard. This is a 37 key vintage synthesizer. I am not an expert on musical instruments so I will tell you what I know. I plugged this keyboard in and it did power up. I plugged headphones into the output jack on the backside and I did get sound when I pressed on the keys. I am unsure if all of the knobs are working perfect since all that I tested was plugging it in and I got sound through the headphones. That is all of the testing I did. I know nothing about this keyboard and I know nothing about how it works. Cosmetically it looks in good condition. I do not see any breaks to it except for the tab that is broken off next to the Hawaiian Guitar Tab. It was made in Japan.”
Click here to search for synths on eBay 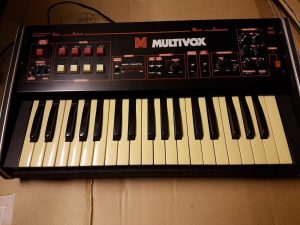 “The Multivox MX 8100 is a rare note entry step sequencer. It is similar to the roland CSQ series but incorporates the keyboard within the unit. The coolest feature of it is, that it can control both a Roland standard cv/gate and a Korg standard hz/v and s-trig independently and simultaneously. The keys have yellowed.* 220 VOLTS* POWERS UP* UNTESTED* SOLD AS IS – NO RETURNS !” Click here to search for synths on eBay 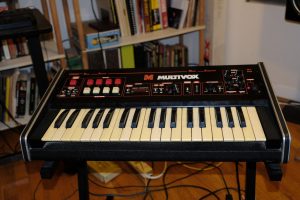 “Up for auction today is a very nice old Multivox MX-8100 CV/Gate synthesizer keyboard/sequencer, made most probably in the late 1970s by Multivox Corporation of America out of Hauppauge, NY. It features 37 keys, the ability to record and playback up to 4 sequences of notes, both Exponential (Hz/Volt, Moog, etc.) and Linear (Oct/Volt, Korg, etc.) output, and multiple tunable parameters. And pretty blinking lights.

There’s a dearth of information out there on this unit, and I’ve never seen a manual for it, so here’s a description of the features as best as I understand them:

On the left front of the board is the sequencer section. You can select any one of four memory banks, play and record a sequence, then play it back by punching one of the four buttons. I don’t know how exactly how many notes a sequence will hold, the amount of RAM in this machine has got to be miniscule, but it’s enough to set up some pretty decent loops. (There’s a handy red “bar graph” to the right of the sequencer banks that will tell you how much memory you have left. But, be aware that the sequences are NOT saved when the keyboard is powered down.)

Going on to the right, you have controls for setting your sequence to one time or endless, as well as for setting the tempo of the playback. You can shut Newkey Trigger on and off and adjust the Portamento rate.

The rightmost set of controls on the board is a lot of fun, allowing you to adjust the Slope, Frequency, and Range of the CV output, for both Exponential and Linear CV. I don’t know the scientific definition of those terms, but I know they allow one to mangle the sound in interesting ways.

There are also 1/4″ jacks for “Remote”, “Foot Switch”, and “External Restart”. Exactly what those do I don’t know. My guess would be that these were designed to be chained together, but that’s only a guess. There’s also a pair of mysterious “Data Ports”. They look a bit like midi jacks, but they’re not. Was it possible to control this unit from some early computer? Your guess is as good as mine.

This particular unit has aged remarkably well, it’s clean and corrosion-free and has only a few minor scratches on the decals. They keys are slightly yellow but work very well, as does everything else I’ve been able to test .”
Click here to search for synths on eBay