“Travel back in time with this classic old synthesizer. Built by E-mu Systems in Scotts Valley, California sometime in the mid-1980s, it’s an E-mu Emulator II+ synth.

It’s all here and in pretty good cosmetic condition, but does not work. It powers up, but the LCD display reads: “Insert Diskette” and “DiskFormat Error.”

It came with two somewhat crusty old 5-1/4″ diskettes, marked “DRIVE PROTECT” and “Backwards. Jolts.” It will not read those. I tried and tried to find someone who would sell me even one good loaded diskette, but could not find anyone.

The only service I’ve done to it is clean and lubricate the disk drive control bar. I had hopes that would fix it, but no luck. As it is, the disc drives makes noise like it’s trying to read the floppy, but it just can’t grab it. The power cord is not original.

It looks like it’s complete under the hood, but I’m no expert. It came out of a long defunct home recording studio in southern Ohio.

For whatever reason, the back EMU logo had been covered with duct tape when I got. Presumably, so folks wouldn’t know what instrument was making such unusual sounds.

It has age and play wear, notably on the top housing, particularly next to the disk drive. Please see photos.

It’s being sold as a non-working repair project. Who’s up for it?

It will be well wrapped with bubblewrap and packing material and shipped in a stout new cardboard instrument box. ” Click here to visit listing on eBay 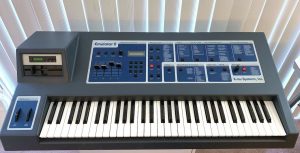 “One of the most full-featured EII you will ever find. Comes with Lotharek HxC SD drive and 5 1/4” floppy drive, also custom-fitted flight case as seen. Superb functional condition, recently serviced (end of 2018). Has very extensive collections of sounds both on SD and on floppies. The SD card contains 3.5 GB of sounds, with many recognizable classics. Additionally, over 100 floppies, including many E-Mu original sounds and a diverse set of high-quality, mostly orchestral sounds (see picture to get an idea). A few duplicates among these disks but most are distinct, and not overlapping those on the SD.

Note: Backlight is out, but the display is already bright and easy to read in low light, as seen.”
Click here to search for synths on eBay 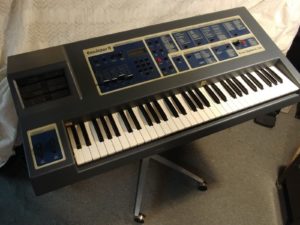 ” This listing is for a Classic 1980’s Vintage E-MU Emulator II Sampler/Synthesizer that is currently not working. It has been in storage in a temperature controlled environment and has not been used for a number of years. Not sure what the issue is, but when the power button is turned on, the disk drives spin but nothing else happens. The display does not illuminate and the disk does not load. Since I don’t have the time to troubleshoot the unit, I’m selling the unit as-is and as not working.

All controls are intact on this Emulator ll – the keyboard, sliders, buttons, mod wheels turn,slide,and depress as they should- see photos

Overall it is in good cosmetic condition, there is however some peeling of the Lexan overlay decal near the slider controls- see photos

Power cord is included. Serial #950″ Click here to search for synths on eBay