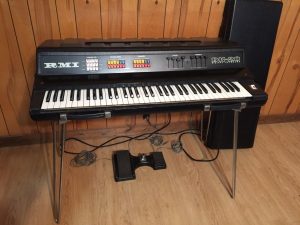 “It has rich, complex, creepy, and dark digital sound that can be modified with different effects and envelopes. You can also layer sounds. If you just start pressing random voices and modifiers you end up with sonic gold more often than not. These were my secret weapons in the 90s back when finding authentic complex keyboard sounds was harder to do. It records very well.

The original pedal that is almost always missing is included. At some point in the 80’s the pedal was rewired and repurposed to control an effects rack. Instead of the normal two outputs the pedal should have it has four quarter inch outputs now. I cannot find the schematics for the original pedal so I have no way to reverse the mod and it WILL NOT WORK with the DK-20 until the mod is reversed, but if you are handy maybe you can figure it out. It is a shame because the sustendo toe stud adds an additional effect to the DK-20. It sounds like a tremolo mixed with a univibe on a very high setting that you control by touching the chrome horn in the middle of the pedal.

I had the DK-20 serviced recently and the only flaw remaining is one LED is out on the front panel. It does not make sense to replace it since the switch works and it is not a generic switch. It is factory labeled. All that has gone wrong with it since I have owned it is a ribbon cable came loose and disconnected the mixer section. It was hard to spot. While I had it in being serviced, I had all the sliders cleaned and it was given a full check out.

Cosmetically the machine looks good with minimal wear. The keyboard action feels good. One of the latches is broken on the original included lid. ” Click here to search for synths on eBay 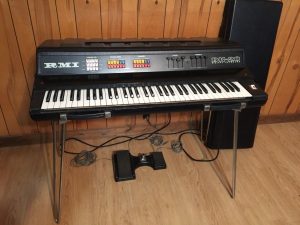 “I really like the DK20. It was always my secret weapon back in the 90s that created nasty funky digital meets analog sounds in the vein of the 368 but with effects. It recorded well and had one foot in the 70s and one in the 80s sound wise. The DX7 came along and killed RMI in the early 80s along with a bunch of great companies. It is for sure a quality professional instrument. The sostenuto toe stud pedal was also pretty cool. The pedal for the DK20 is unique to the DK20 only, so having the original pedal is pretty great.

I bought this off craigslist without trying it first (stupid me). It works and sounds good but has some issues that need addressing to be perfect. You could play a gig with it tonight no problem but you would not be able to use the “mixer section”, one LED would be out, and the pedal would not work to it’s full potential. Because there are no techs in my area and I already have one of these I am going to sell this “as is.” If there is a deeper issue I am not aware of it. I am selling this CHEAP and 100% as is.” Click here to search for synths on eBay