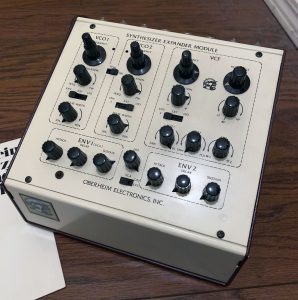 “VG+ Condition. Functions perfectly. The cosmetics are also excellent! All the knobs are present and have their appropriate caps, nothing is missing.
It also comes with the original manual. This SEM has spent the last decade in my smoke-free studio.

It has never been modified and has the following Inputs:
– CV
– Gate
– Trig
– Audio
It has one Output for Audio.

Buyer pays shipping. Sold As is. No returns.” Click here to visit listing on eBay

Vintage Oberheim SEM module! 100% working. Face is in great shape!!!! All knobs, functions work great. The housing shows wear (bottom and sides). The output for low was modified to 1/4 inch. The unit appears to have been recapped properly- the original tropical fish caps are still there (never swap them unless you MUST… you will hear a difference) There has definitely been some work done inside- the 1/4 mod, recap, some wiring looks non original. BUT I always took it as it was serviced. The unit sounds and performs as it should but it has NOT been calibrated. Assume drift.

It tunes awesome and HOLDS tune, unlike my Minimoog LOL… which btw it was MADE for. As an expander for a mini, its ridiculous. And theres a mod you can do on your mini for CV out and you can control it from the mini!!! (It was called the “S”ynthesizer “E”xpansion “M”odule LOL) Thats how I’ve been using it and it kills. But I’m so tired of multi tracking chords note by note LOL!!!!

This is an actual SEM not a rehoused module from a 2, 4 or 8 voice.” Click here to visit listing on eBay 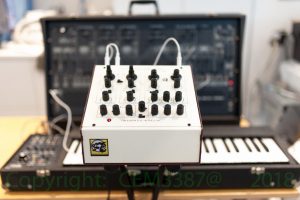 “Fantastic example of the original amazing sounding Oberheim SEM from 1976!

These raw sounding oscillators combined with the multi mode filter is just heaven like!” Click here to visit listing on eBay

If your looking at this you know what it is!

“For sale is a vintage oberheim SEM module. It is factory powered. It is 40 years old this year! The date and serial where probably hand written by Tom way back when..

It is fully working with one minor issue. The lp/hp/bp knob is scratchy when you turn it but only when you turn it. No noise when it is stationary. The synth was serviced by switched on in Austin two years ago.” Click here to visit listing on eBay

” For sale is a vintage oberheim SEM module. It is factory powered. It is 40 years old this year! The date and serial where probably hand written by Tom way back when..

It is fully working with one minor issue. The lp/hp/bp knob is scratchy when you turn it but only when you turn it. No noise when it is stationary. The synth was serviced by switched on in Austin two years ago. ” Click here to visit listing on eBay

“This Oberheim CPS-1 Synthesizer Expander Module in perfect working condition. All internal and external parts are 100% original. It has a manufacture date of June 27, 1977. Cosmetically speaking, only the most minor scuffing is observable on the vertical front panel, and the sticker which read “VCA CTRL” is faded . Also, the rubber foot pads on the bottom have moved slightly, however they are still very strongly adhered. I did not want to re- position them and glue into place, rather I figured the new owner can make that decision. I am including documentation showing that it has recently been given a thorough inspection, testing, cleaning, and lubrication of pots and switches by Synthtronics Electronic Music Services in Southborough, Massachusetts. I am also including the original instruction manual, however I believe the outside cover is missing. The unit is 9 inches wide, 8.5 inches deep, and 6 inches tall at its highest point in the back, and 3 inches tall at the very front. Free shipping. ” Click here to visit listing on eBay

“So this is a really unique piece of equipment. I got it from a friend who passed away several years ago and it has been sitting (like many other synths in my studio) for several years without use. I took it out and set it up, and it needs the following: SEM#2 needs to be calibrated. It is out of tune with the three other SEM’s. All of the knobs and switches work on SEM#2, it just doesn’t track with the others, so I turned it down in the mixer section to test the other three SEM’s. The other three work great. The other thing missing is the bulb behind switch number two in the programmer section. The switch works, but it doesn’t light up. I usually recommend taking any old analog synthesizer to a qualified tech who can give it a tune up because often the oscillators can come out of calibration during shipping. The bulb is not necessary to operate the machine, but getting the 2nd SEM calibrated is not negotiable in my opinion, because it sounds so amazing when they are all in tune. I almost sent it off to the famous JL Leimseider for tweaking, but decided that anybody who knows what this is, and wants to own it, has access to a tech who can do the work, and why risk shipping it more than I have to? Most large cities have shops that can work on these things.

If you are not familiar with this synthesizer, this is one of the very first analog polyphonic synthesizers ever produced by Tom Oberheim back in the 1970’s. It was used by Josef Zawinul to get the “Birdland” horn sound on Weather Report’s “Heavy Weather” album, and Lyle Mays on the first couple of Pat Metheny albums amongst many others. It is unique mainly because unlike the Prophet-5, or JP8, or even the OBXa, it was more like playing four Minimoogs from one keyboard. Each SEM is an independent synthesizer and can have it’s own settings. And speaking of the keyboard this one obviously doesn’t have one. This might be a problem for some collectors, but frankly the keyboard that came with this unit was only four octaves, had no velocity or aftertouch, and the overall unit was HUGE and HEAVY. My friend had his rack mounted by one of the great synth shops in Los Angeles decades ago and they added MIDI. It also has CV gate ins/outs, which I have not tested, but I would be surprised if they do not work because they are very simple connections. The owner’s manual has all the original patch sheets in the back as well as CV/GATE diagrams and what appears to be a service manual. I told myself I would never sell this for several reasons, but I need the cash. ” Click here to visit listing on eBay

“This set of Oberheim Electronics Synthesizer Expander modules comes from my late-husband’s recording studio. I do not know if it works. I know nothing about it. It looks like he bought two modules and built a synthesizer with it? The modules aren’t attached to the front of the unit, so they move around. This will be a very difficult and delicate operation to ship.” Click here to visit listing on eBay

“This is an original vintage stand-alone Oberheim SEM, one of the true classic analog synthesizers. It has been recently serviced and is in very good cosmetic condition, with a few minor scratches.” Click here to visit listing on eBay

” Up for auction is an original Oberheim SEM module, CPS-1, from 1978 or 1979 (serial number 102). I am the 2nd owner of this unit and have very much enjoyed owning it since 1985 (30 years). As you can see from the pics it is pretty clean overall cosmetically. There are few scratches on the side panels, but nothing major.

I would say it definitely needs to be looked over and cleaned/calibrated by a tech since it is vintage 1970s era Oberheim electronics. I have not used it all that recently, but it was working well a few years ago. It has always been kept in a good environment (either a smoke free studio or climate controlled storage)” Link