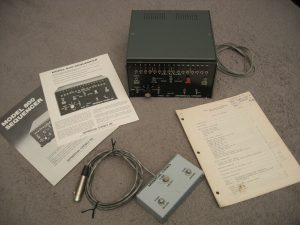 This is being sold AS/IS – needs repair or for parts/not working.
This is the early version with the PCB with no solder mask and the large 10 bit DAC but with the Sequential Circuits name not the early logo..

In record mode all banks except 15 seem to work.
In playback banks 1 & 2 are skipped but not bank 15.
It seems to function but it skips memory banks 1 & 2, leds for banks 8 & 11 are out.
These were my notes when I still had a synth – I no longer have one to try with this.” Click here to visit listing on eBay 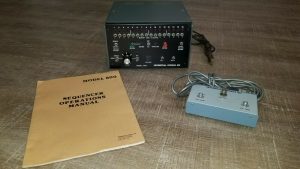 “SEQUENTIAL CIRCUITS MODEL 800 SEQUENCER for use with analog synthesizers. Condition is Used.
I am the original owner and purchased it new in the late 70s’ and used it a lot back then with a Micromoog. It has not been used in many years, however, it appears to be in working condition. There are a few small scratches on the top of unit (see photos). Footpedal and manual are included.” Click here to visit listing on eBay

”
This is an extremely rare and amazingly intuitive sequencer. It belongs with someone who will use it more than i do. It’s one of the finest Cv/Gate sequencers ever made due to it’s logical layout and improvisational capabilities. More on that later…

There were only around 500 made, and they were hand made by Dave Smith himself. He started his entire company Sequential Circuits based on this round of sequencer sales, which then provided his business foundation for developing the Prophet 5 and other major musical instrument milestones .

And what’s more is that of the 500, only the first 50 or so had the capability of working with both V/Octave standard AND Hz/V standard. This is one of them. It is serial number 0041, and presumably this capability was more expensive due to the pricier D/A conversion necessary for the higher resolution.

AND, what’s even more, is that this is one of a small handful that had a mod done to the unit (by Dave Smith) that allows for musical rests to be placed between notes. One can add as many single beat rests as any sequence can fit.” Click here to visit listing on eBay

“Up for your consideration fellow synthesists: The rare vintage Model 800 by Sequential Circuits. I used this with my Arp 2600 for many years. It was a lot of fun, but now it’s time to pass it on to someone else to get creative with! I used it about a year ago and it worked fine. All LED indicators, toggle switches, I/O worked fine. I powered it up today with no problems (see pics), but my system has been dismantled so I can’t verify its current operational state, and therefore I am selling it as-is with no returns.
However, Dave Smith seemingly built these to military spec- they were built rock solid- like they had a Pentagon budget! I bought this one when they first came out (1970’s) so it’s had a stable home environment. These are rare animals especially since it also comes with the original footswitch. I have the original manual somewhere… if I can find it, it’s yours as well (but no guarantees). ” Click here to visit listing on eBay

”
But getting to my personal opinion on this sequencer.. The real magic behind this thing is the capability to move around from sequence to sequence in a gorgeously intuitive manner. You have 16 banks of up to 16 notes, and you can disengage or engage any you like, at any point in time. When the previous bank is done playing it will jump to the next logical place. It sounds simple but there really are NO other sequencers that do this. On the 800 you can set your sequencer flows and forget it. It just keeps playing all of the sequences one after another in a long cycle. Have an urge to remove one? Flip a switch. Next time around it’ll skip it. You can also make it function like typical step sequencer by loading only one or two notes per bank, and then you can use the whole set of 16 banks treated as one note each to make a short short sequence as a single musical phrase. But having the ability of loading up to 16 notes per bank means it performs both like these step sequencers and like a series sequencer such as on a Roland JX3P and other Rolands. The flexibility and musical performance improvisation in this single device is still unparalleled to this day. Needless to say there are a lot of possibilities with this unit. 16 notes x 16 banks equals 256 total note sequence, with beautiful live variability.

I also have included a custom cable for external clocking. The clocking works perfectly and is rock solid tight like other professional cv/gate sequencers.

The unit has a collapsable stand as well, allowing for propping up the face to be above a synth if you place this unit behind a synth on a table. It also allows for cabling to be tucked underneath.

The only thing to be aware of operationally is that it needs to warm up for 20 minutes or so before pitch is perfectly consistent at all times. It powers up immediately and operates fully but for the first bit of usage it can go off pitch seemingly randomly. But after it’s been warmed up it runs perfectly. Besides, maybe this really doesn’t change your sessions because you’ll want to leave this unit on a lot anyways since it’s the old school volatile memory type of sequencer. I was in touch with the tech who fully restored this and we decided the pitch thing after startup was a temperature issue and that once the circuits are settled in temperature the pitch is solid. As you can tell from the video, this is the case. Absolutely perfect, as is the timing. So just turn it on ahed of time and you’re set. Or just leave it on. If you need further evidence of stability, i suppose i can make a long long video showing it playing for an hour straight haha. ” Click here to visit listing on eBay

“Vintage Sequential Circuits model 800 sequencer..all original and in good working order.all lights,switches.knobs and display work as they should..low serial number 071….very rare and made by Dave Smith as the very first product offered by sequential circuits…some slight wear and a few tiny scuffs..some oxidation on a few of the case screws but nothing very noticeable or major…It’s 40 Years Old! will include a copy of the original hard to find manual as well.” Click here to visit listing on eBay

This unit has been fully tested with a dotcom modular system. All functions have been tested and found to be working as designed.

This unit comes with the rare foot switch. Two of the LEDs appear to have been replaced; they burn a little brighter than the rest.

A switch has been added to the back of the unit to allow the output jacks for CV and Gate to be directly connected to the input jacks for CV and Gate. This is beneficial for patching configurations where the source synth keyboard is not the playback synth. The switch is toggled back and forth between recording and playback. ” Click here to visit listing on eBay

“Sequential Circuits Vintage Sequencer: This unit is a rare vintage find. I used it back in the day with an analog Oberheim expander module, or my Prophet 5. The unit has been in storage for a long time, and I no longer own any Analog synthesisers so I have no way of checking all the functionality of the unit. Unit does power up though, and pedal is controlling record on/off feature so I’m assuming it still works. Comes with Sequential Circuits original foot pedal as shown in pics. AC for both units is attached.” Click here to visit listing on eBay

” I am selling this as non-working unit.It powers up.I think the problem is with the internal clock not working.There is a guy on You Tube who talks about this problem. You can manually step through the events.All switches seam to be working .I don’t have an analog keyboard anymore,so I can’t input any notes or play anything out.I’ve taken a few pictures showing different numbers and lights on the display.These units are very rare..There were only less than 500 made.Mine is SN 072 .I also have the start/stop foot switch.This unit is also made for the US market (110v).Unlike the other unit listed from Japan that needs a power converter.I was the only owner.It sat in my smoke free personal studio for years.Then it was packed away.I might even have a photo copy of the circuit diagram somewhere that I will include if I find it.There is some scratches and nicks.But for as old as it is ,it’s in good shape.No broken switches.All LED’s light up.” Click here to visit listing on eBay

The unit turns on, most of the switches and buttons seem to be responding, however I have no knowledge how to make this thing work, and the functions are UNTESTED.

So I’m selling this AS IS as an untested unit, which may need some sort of servicing/adjustment done by the buyer’s responsibility.

Cosmetically, the unit is in nice and reasonable condition for its age as you can see. There are signs of wear and minor surface marks here and there, but nothing too major. All the outer parts seem to be there in place and shape. I’m including plenty of pictures so you can see exactly how it looks.

“Exceedingly rare Sequential Circuits Model 800 – Excellent used condition, one owner, only light use. All switches, LED’s, display, and knobs work as they should, fully tested. All switches and jacks cleaned. All memory banks tested through all 16 steps with no record or playback issues. Switch works perfectly, with no issues. An amazing piece of equipment for CV/gate controlled synths. A great collector’s example of the evolution of synthesizers!” Click here to visit listing on eBay