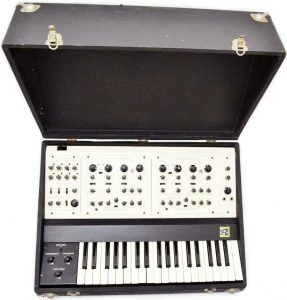 ” Looking to own a piece of music history? Need to reclaim some vintage sound? Check out this OBERHEIM TVS-1 VINTAGE 1976 2-VOICE POLYPHONIC ANALOG #0045 37-KEY SYNTHESIZER!!!

This is a used OBERHEIM TVS-1 VINTAGE 1976 2-VOICE POLYPHONIC ANALOG #0045 37-KEY SYNTHESIZER!!! Used, but in good shape for its age!!! Does have some normal cosmetic wear on it (pictured) including some scuffs, scratches and rips in the outer vinyl here and there but nothing too major!!! The synth has been tested to the best of our abilities and still seems to be working perfectly despite some light crackling when actively adjusting knobs and switches. Not at all out of the ordinary for any electronic instument this age but sound seems to clear up fine once settings are dialed in!” Click here to search for synths on eBay 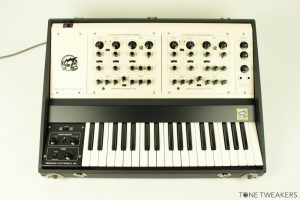 “This unit was fully cleaned inside and out, fully serviced, future-proofed and reassembled over many hours to make it way better than others of its kind – you will not find a better one. eBay only allows us to post a limited number of photos but we have a lot more on our website, just use the search feature for 2 voice to find them.

One of the latches is broken. We didn’t replace it because most people only use these in the studio these days. The lid also stays on reasonably well with one working latch. If you want to buy this unit and would like one or both latches replaced, please email us for a quote.” Click here to search for synths on eBay 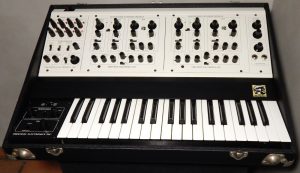 “Vintage Oberheim TVS-1A Two-Voice Analog Synthesizer in 100% Working Condition. Very well cared for with all original knobs with caps, all LEDs working, no sticky or dead keys, no dirty pots, no hum or crackling. There is one issue with the high “B” key being a bit higher than the row (please see pic). It does not affect function or playability. This TVS-1A will be meticulously packed with only new bubble-wrap in the first new box. Then, more new bubble-wrap inside the second new box. A 37″x30″x18″ double-walled box weighing in at 51 lbs. 4 oz. Includes two power cables, copy of the manual and schematics. Capable of deep analog saturation without losing clarity. The incredible sound one expects from vintage Oberheim SEM modules. In 1975, Oberheim created their first compact, programmable and polyphonic synthesizer by coupling two SEM modules to a 37-note keyboard and a simple analog sequencer. This was what became the Two Voice. Oberheim achieved a polyphonic sound not yet seen at the time by hard-wiring the two monophonic SEMs into the compact keyboard design. In 1976 Oberheim came out with another module, the Polyphonic Synthesizer Programmer. This could memorize the control voltages of many parameters for up to eight SEM modules. When these were added to the Two Voice in the form of the Mini-Sequencer, Oberheim finally had one of the earliest programmable and polyphonic instruments. Each voice has its own filter. The filter is unique and like no other, and apparently cannot be reproduced even by its own creator. The 8-step analog sequencer controls each voice/module independently allowing two independent sequences to be run simultaneously if desired. ” Click here to search for synths on eBay 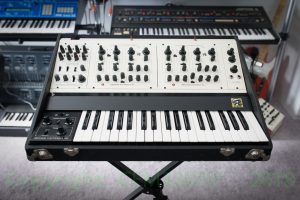 “Extensive future proofing performed in May 2018 (see specifics below).
This machine is now ready for another 40+ years of fantastic music making.

The Mini sequencer has so many cool functions that makes the TVS so much more than the sum of it’s parts.” Click here to search for synths on eBay 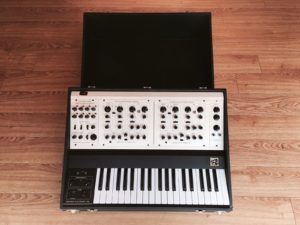 “This is the original vintage 1975 synth, with an extremely low serial number, not the reissue. It’s unlikely you’ll find another currently on offer in the USA, and very unlikely you’ll ever find one in as good condition.

100% fully functioning. Recently serviced and calibrated in late March 2018 by Nick Montoya of Moog Music. This is one of the finest examples you’ll find.

The only cosmetic imperfection is a small, light scratch above the volume knob, and on the outside of the case, there’s are a couple of small tears. It looks almost new.” Click here to search for synths on eBay 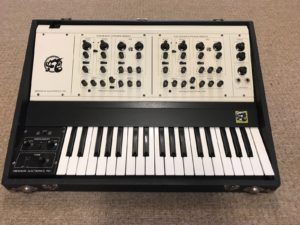 “I have Owned this for 15 years.. its loveley condition

I will miss it I know but I am no longer using it so it need a good home..”
Click here to search for synths on eBay