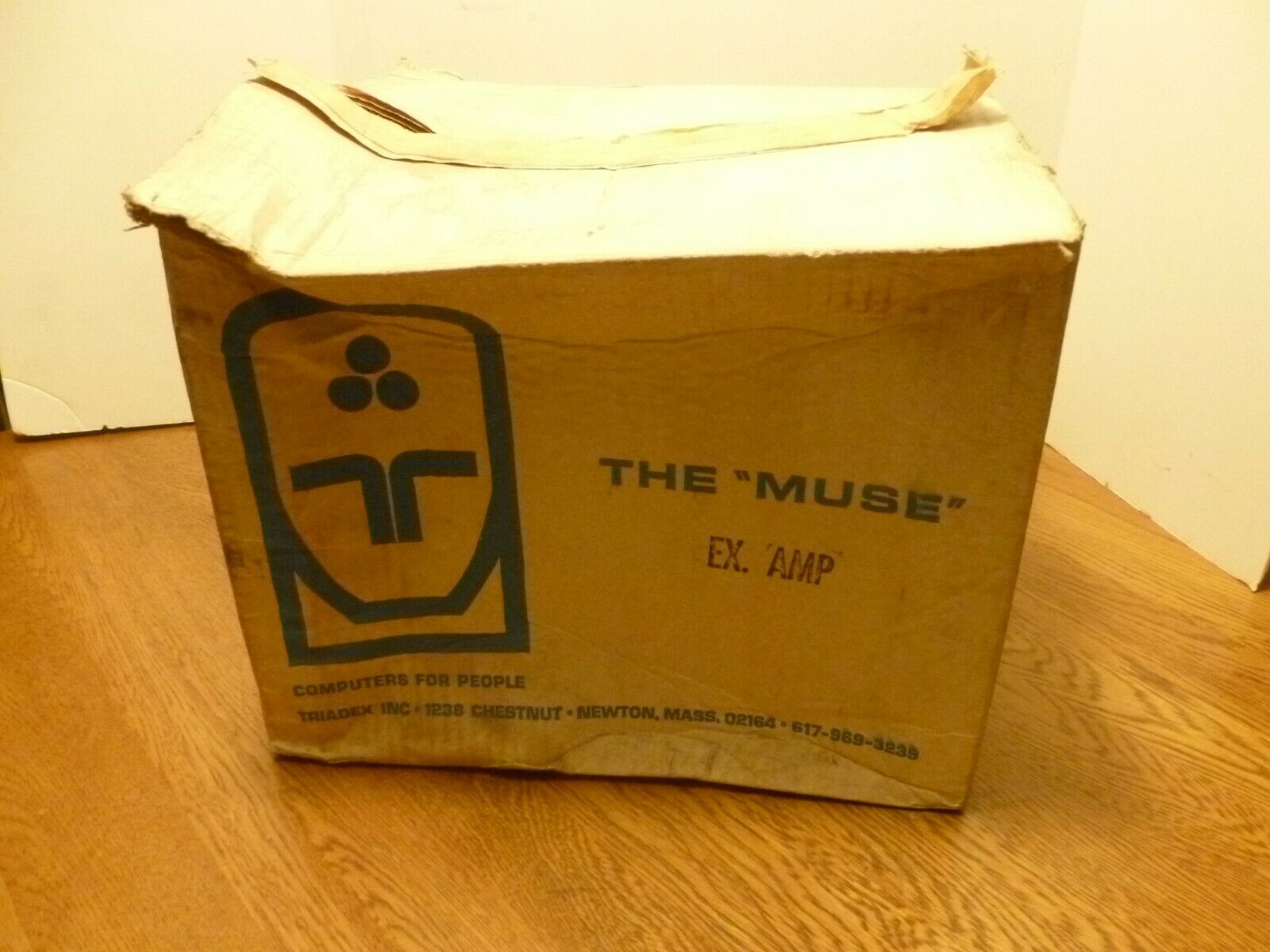 A vintage 1970’s speaker amplifier that is an accessory to the rare and famous Triadex Muse Synthesizer.
The Muse was designed by two famed MIT professors, Marvin Minsky and Edward Fredkin.
Although the synthesizer had its own built-in speaker, this amp was available as an external.
The Mid-Century Modern Triangle shape measures 13-1/2″ wide x 11-1/2″ high x 11-1/4″ deep.
The case is made of wood and brushed aluminum.
The speaker cover is made of worsted woven wool in turquoise and black.
Please note that the connecting cord is an RCA style.” Click here to visit listing on eBay 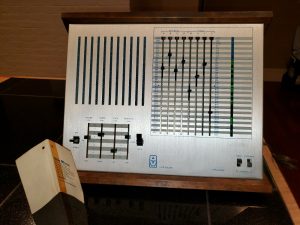 Doesn’t have the optional amp, light box or paperwork. Please research for yourself, but anyone who knows what this is and has been looking for one, you already know.

Everything works. Normal and minimal out of box wear. Beautiful machine!

All buttons are present.

Smooth “action” on all slides.

Only flaw i can see is a cleaning scuff on the wood box from tape or something.” Click here to visit listing on eBay 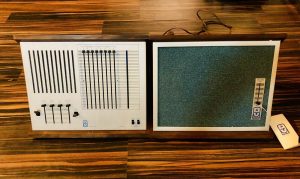 Comes in original box with original literature, operating Manuel, much more!! Tags still on it. I don’t think this unit was ever really used, just turned on. It’s believed that less than 300 were made worldwide in 1972. Over 46 years ago. This might be the last in perfect condition MUSE left in existence! Own it today before it’s too late!” Click here to visit listing on eBay 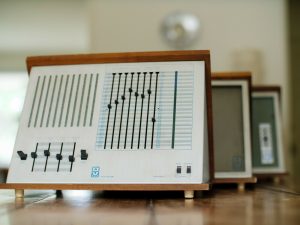 “The Muse (synthesizer ONLY) by Triadex Inc., 1972
I am the original owner of this Muse model -1. My Dad worked with Ed Fredkin on the rollout of The Muse back in the early 70’s. When he brought a set home I made sure it lived in my room – as one of 4 kids that wasn’t easy. The other two components, the light show and the external amp are now in the collection of the Computer History Museum in Mountain View. If you haven’t been there definitely go -it’s an amazing place. The last picture is of the CHM music exhibit, the day we dropped off the other components. ” Click here to visit listing on eBay

“Up for your consideration is this vintage Triadex Muse synthesizer and amplifier set.
They’re both “New Unused In The Box” and below you’ll find a demo video along with the photos.
We don’t have the patch cords that connect the Muse to the amplifier to test the operation of the amplifier,
so the amp wasn’t tested and is being sold along with the Muse in “as is” condition.

These rarely seen Muses seem to show up here in the Boston area more frequently than anywhere else in the country, due to their close proximity to
MIT and Brookline, MA. where they were manufactured.
The Muse is probably the rarest, strangest, best-looking vintage synth ever mass-produced; it cost $300 in its and looks like something
Dieter Rams would have designed for Braun in the sixties.

The Muse had, in its day, impeccable geek credentials; It was designed by two famed MIT professors, Marvin Minsky and Edward Fredkin.
At the time, Minsky was moonlighting on the movie set of ‘2001 A Space Odyssey’, teaching Stanley Kubrick about Artificial Intelligence as he
created Hal.
Ten years later, Edward Fredkin would create the Fredkin Prize, to be awarded to the creators of the first computer to win the
World Chess Championship.
He paid out the award to IBM’s Deep Blue in 1997.

The Triadex Muse is the first digital musical instrument and was produced in 1972.
It is an algorithmic music generator: it uses digital logic circuits to produce a sequence of notes based on the settings of various parameters.
Since the Muse was designed as a composition tool, not a synthesizer, there is no control over the timbre of the sound;
rather, the front panel controls affect the melodies that are generated.
The exact logic behind the composition engine is rather technical, and not exactly intuitive, but the manual explains it all in depth.
The four small sliders in the lower-left control Volume, Tempo, Pitch, and Fine Pitch.
The switches to either side are used to start and stop the sequence, or to step through it note-by-note.
Of the eight larger sliders on the right, four control the musical intervals used (labeled A, B, C, and D),
and four control the theme (labeled W, X, Y, and Z).
A rest can be substituted for the lowest note by flipping a toggle switch.
The tempo clock can be slaved to that of another Muse, allowing for multi-part compositions.

The cosmetic condition of the units are in excellent condition as they’ve only been taken out for this demonstration.
The original instruction manual, papers, & tags are included with the Muse and amplifier.” Click here to visit listing on eBay

“Triadex Muse, rare algorithmic sequencer and tone generator. Produces a million possibilities for melodies by making various selections with the control sliders. Fun and easy to use.

This unit is fully functioning, however one LED is not lighting in the matrix (which has no effect on the sequences or sound). Wood base is slightly warped, and there is some wear to the finish on one edge of the wood as seen in the photos. ” Click here to visit listing on eBay

“It looks like it’s missing a couple of switches and will need a small amount of work to be fully functional. You will need to source the parts which is the hardest part since there were less than 300 made, but if you already have one and need parts, this could be your ticket!

Luckily, you can play with this bad boy as is, as shown in my youtube video I put up. Look up: Super Rare Triadex Muse Digital Synth For Sale to see the unit in action.”