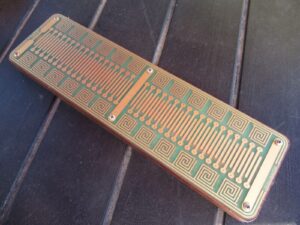 “Looking for new home
Ciat-Lonbarde Tocante Bistab, used (but not enough). Condition is “Used”.
I purchased this Tocante from Peter B. in 2018 at a workshop in Portland, OR. Solar charging works great, sounds great especially when amplified” Click here to visit listing on eBay 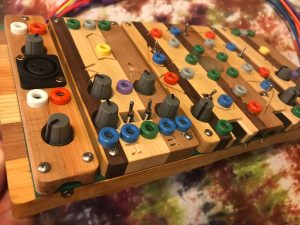 Comes with power supply, eight ~8″ and ten ~14″ stackable banana cables, and a basic diagram I printed out.

I would rather not sell this beautiful instrument, but these are difficult times.

I’ve only owned it for a few months, and I bought it new. It is in excellent, essentially new, condition. Always kept stored in a case when not in use.” Click here to visit listing on eBay 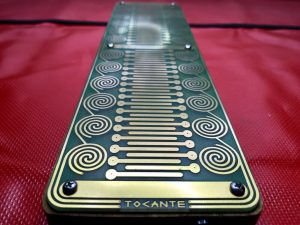 “This auction is for a Ciat-Lonbarde Tocante Phashi, used and fully operational. Please refer to the photos of the item you are bidding on and ask any questions you may have. ” Click here to visit listing on eBay 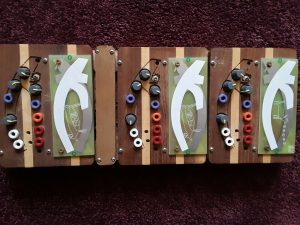 ” ciat lonbarde deerhorn organ (mk2?) theremin synthesizer. Condition is Used.This is not the currently produced version but the one made just before that.” Click here to visit listing on eBay 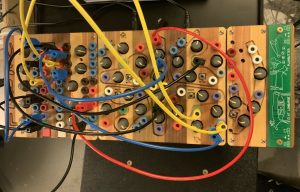 “Ciat Lonbarde Plumbutter 2 in excellent condition. Will include enough banana patch cables to keep you going as well as 5 x banana to eurorack cables so you can interact with eurorack.” Click here to visit listing on eBay 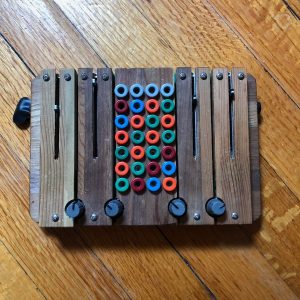 “Used just a couple of times. It’s like brand new.
Can be powered with a 9v battery (for camping) and it has 2 internal speakers.
Also iam sending 6 pomona banana cables and a power adapter to get you started. :)” Click here to visit listing on eBay

“The Sidrax Organ follows a lineage of electronic musical instruments based on touch. It was redesigned twice, first as Sidrassi, then as Sidrazzi. It has seven wooden bars that you press to express seven oscillators within. Each oscillator has its own fine tuning slider, embedded right within its bar. Also, there is a master pitch knob, and a master chaos knob. The master chaos knob makes the instrument go from pure triangle tones to a nest of noise. It does this by gradually increasing modulation from one oscillator to the next in a circular pattern. Sidrax has enough bars to construct sweetest melodies from the triangle waves, whereas Tetrax is a simple four-bar entity, with complexity of tone for funky bass.

There are 44 modulation points brought forth as banana jacks. They are arranged in seven columns, representing the seven bars. Their layout is shifted diagonally, to allow inputs in proximity to outputs. This is for touch-playability; you can make banana jack metal studs that can be squished by hand to gesture-patch the instrument. Inputs are cool colors: blue, green, and grey. Outputs are hot colors: red and orange. The grey jacks are parallel inputs with the master knobs: the one on the left is for master pitch, the right one is master chaos. The color allotment for each bar is as follows:

Two orange jacks, representing the press and release gestures on that bar in voltage.

One red jack, which is the pure triangle output of that oscillator.

Two green jacks, that are “glitch” inputs. They cause the boundary conditions of each oscillator to wire to the output of another. A modulation inspired by circuit bending.

One blue jack, an fm modulation input for that oscillator.

The Sidrax organ has a stereo-mini output on the back. This is because each bar, outputs in different channels during the press/release cycle. In addition to the stereo-mini jack, it has an power switch, and optional built-in batteries, or an external, 9volt battery snap.

As a bonus of this auction I am including a power adapter and 7 patch cables.”
Click here to visit listing on eBay

“I will hate myself in the morning…

” This is one phenomenal instrument. It lives and breathes a beautiful sound of its own. Out of everything I have to sell to go to Vet school this is the one piece I still want to hang on to.

I had this plugged into a Strymon Timeline and Bluesky and the results are literally awesome. There’s some patch sheets on Muffwiggler that got me started and then I just got into it from there.

I got this brand new earlier in the year and it still smells like fresh cut wood – awesome!

It comes complete with a stereo output jack, power supply and 26 PVC stacking banana plugs (various lengths) from Test Path so you’ll have everything you need to plug and play right away.

This is the ticket to unique one-of-a-kind sounds, atmospheres and drones in your music and film scores.” Click here to visit listing on eBay

“Ciat Lonbarde Plumbutter synthesizer/sequencer/drum machine in great condition. Comes with 15 patch cords and AC adapter. You may want to purchase some additional patch cords. It’s a rather esoteric instrument, so I’m assuming if your reading this you know what it is, but there is more info on the Ciat Lonbarde website. ” Click here to visit listing on eBay

“Another piece of gear that’s a little smarter than me.
Fun, but could not get into the programming GUI.
Sidrazzi is more my speed…..
Nice unit in good working order.” Click here to visit listing on eBay

” Auction includes power supply for coco. Both units in good condition with nicer woods than the average ciats.” Click here to visit listing on eBay

“The Deerhorn is a fantastic Theremin-like instrument by Peter Blasser / Ciat-Lonbarde. The Deerhorn organ is made up of three of these Deerhorns.

Each Deerhorn has an antenna, the circuit boards in the photo by the knobs and jacks, two oscillators, and two VCAs. The distance of your hand and rate of approach or leaving from the antenna control the volume of a VCA (one VCA for motion toward the antenna, another VCA for away. The VCAs then go to a stereo 3.5mm jack, which gives a stereo feel to the instrument). That control voltage is also available at the orange jack. It can be patched into the purple jacks to control the pitch. There are other jacks, and wonderful cross modulation possibilities exist.

This is the older style unit (no audio input).

I added a ground banana jack, it’s on the back, near the audio output, in line with the 3rd Deerhorn’s antenna. It works perfectly. I should say that I had to repair one of the tuning capacitors in one of the Deerhorns after it broke while I was calibrating it.” Click here to visit listing on eBay

“Ciat-Lonbarde Sidrassi Organ from the days when Peter Blasser was making each instrument by hand and in very small numbers. The larger barres create an EXTREMELY sensitive and expressive experience. Tap gently for percussion noises, longer presses for very articulate control over organ sounds ranging from sublime to chaotic.” Click here to visit listing on eBay