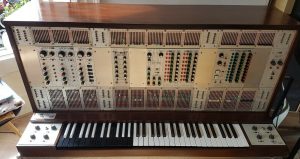 only around 20 units produced between 1970-1971 before production started on the later ARP 2500 Model 2515.
Recently fully restored by Phil Cirocco at CMS Discrete Synthesizers in the US
Additional calibration and snagging carried out by Keith Kniveton at Lucid Sound in the UK
Cabinet fully restored.

As part of the schedule of works, Phil replaced the power supplies with modern linear models.

All modules were assessed and repairs carried out as needed. Trimmers were added as per ARP specs to aid future calibration.

1026 modules are a short run produced in very low numbers last year, the 1026 was only ever a prototype and never formally released. It syncs to the 1027 sequencer and 2 x 1026’s can be daisy chained which is how its currently configured. They introduce random elements to sequencer steps and are highly complex, interacting with each other.

This has been a no expense spared restoration and has taken around 6 years to complete.

Sonically, it sounds incredible and even in its current layout can sound very complex, admittedly its not the most advanced of configurations and there are currently 2 blank module spaces that could add more tone colour if populated with additional modules.

this is a rare opportunity to pick up an icon of electronic music.

I’m now starting work on a second system so letting this one go.”
Click here to search for synths on eBay