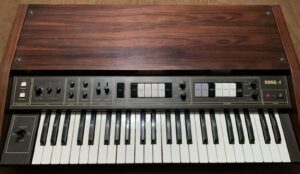 “All functions are working. The unit has some signs of age but overall in great condition!! All keys, sliders, knobs and buttons working well. Tested before listing. Please see pictures” Click here to visit listing on eBay 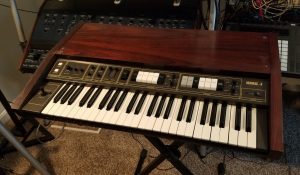 “This listing is for one Korg Lambda vintage synthesizer. It is working great and other than some scratches here and there, looks good too. There are not many Lambdas out there, an unfortunate fact as they are well-equipped at performing 70s/80s polysynth sounds, Solina-like stringsynth pads and 70’s-esqe synth-clavs, pianos, etc. The sound is very similar to the PS-3100/3200/3300 range of synths. Good luck and happy bidding!” Click here to visit listing on eBay

“It’s an old piece but is in good condition. There are a few cosmetic blemishes but it’s in great working condition. The Korg Lambda is a fully polyphonic 48-key preset synthesizer released in 1979. It features two types of sound – Percussive (Electric Piano, Clavi, Piano, Harmonics) and Ensemble (Brass, Organ, Choir, Strings I, Strings II). The Percussive sounds have a simple fast attack and variable decay envelope, and the Ensemble sounds have both preset and variable attack/release envelopes. Each key is articulated independently, so there is no note-stealing as experienced on synths limited to a handful of voices. The downside of this is the relative lack of programmability, but the presets sound good, particularly when layered (they are all available simultaneously).” Click here to visit listing on eBay

“A Korg Lambda Synth.
Working perfectly. Recently had a complete service and repair by Lucidsound.
The wood surface has minor scratches and water marks from a tea cup. See photos for details.
PICK UP ONLY.” Click here to visit listing on eBay

” The instrument is in good cosmetic condition for its age (see the photos).

The instrument works but has some issues. Here’s what I’ve noticed:

* For some voices a tone several octaves higher may be audible when playing approximately the lowest octave of the keyboard.

* The second F from the bottom of the keyboard works inconsistently.

* The highest G# on the keyboard decays abnormally slowly for some voices.

* The SUSTAIN switch and sustain pedal don’t appear to work.

* The PIANO voice sustains (in error) if it’s the only voice enabled in the PERCUSSIVE section.

* The CHORUS PHASE buttons work but sometimes require more than one press.

* ATTACK RELEASE VARIABLE always introduces some attack time, even with the ATTACK control at minimum. I don’t know whether this is normal behavior.

“Sold as is. Not working; needs repair. Some keys stick.” Click here to visit listing on eBay

“A VINTAGE KORG MADE IN JAPAN SYNTHASIZER,IT ALL LIGHTS UP WHEN PLUGED IN, ALL SWITCHES AND KNOBS WORK OK,THE CASE IS IN VERY GOOD CONDITION NO DAMAGE.I HAVE NO IDEA HOW IT WORKS, ” Click here to visit listing on eBay

“This auction offers my Korg Lambda ES50- anything else seen on the Photos is not included as part of this auction. The unit is fully function ” Click here to visit listing on eBay

“SELLING A RARE VINTAGE KORG LAMBDA ES 50 SYNTHESIZER,BEEN IN STORAGE FOR A LONG TIME HAS SOME ISSUES THE KEY HAS CHIPPED EASILY REPLACE, KEYS ARE EASILY BOUGHT ON EBAY, AND IT IS MISSING THE TOP END OF THE BEND ARM, AGAIN EASILY PICKED UP ON EBAY,ONLY SELLING BECAUSE IT IS TO BIG FOR MY COMPUTER STUDIO, AND I HAVE GONE ALL DIGITAL, LEGENDARY VINTAGE KEYS, MUCH SORT AFTER. ” Click here to visit listing on eBay

This Synth works and sounds great, but… :

– When turned up loud you can hear light to moderate interference out of the Mix Out and Headphones Jack
– 3 DEAD Keys – Center D, D#, and E are all dead. I don’t know why this is happening.
– 2 Sticky keys – High Octave C# and D stick but come right back up.
– Octave Up button does NOT appear to work at all.

This synth works but it does have the above mentioned issues. It is being sold As-Is with the above listed issues.

I have not tested every single function. – Please bid/buy accordingly. This is an AS-IS sale.” Click here to visit listing on eBay