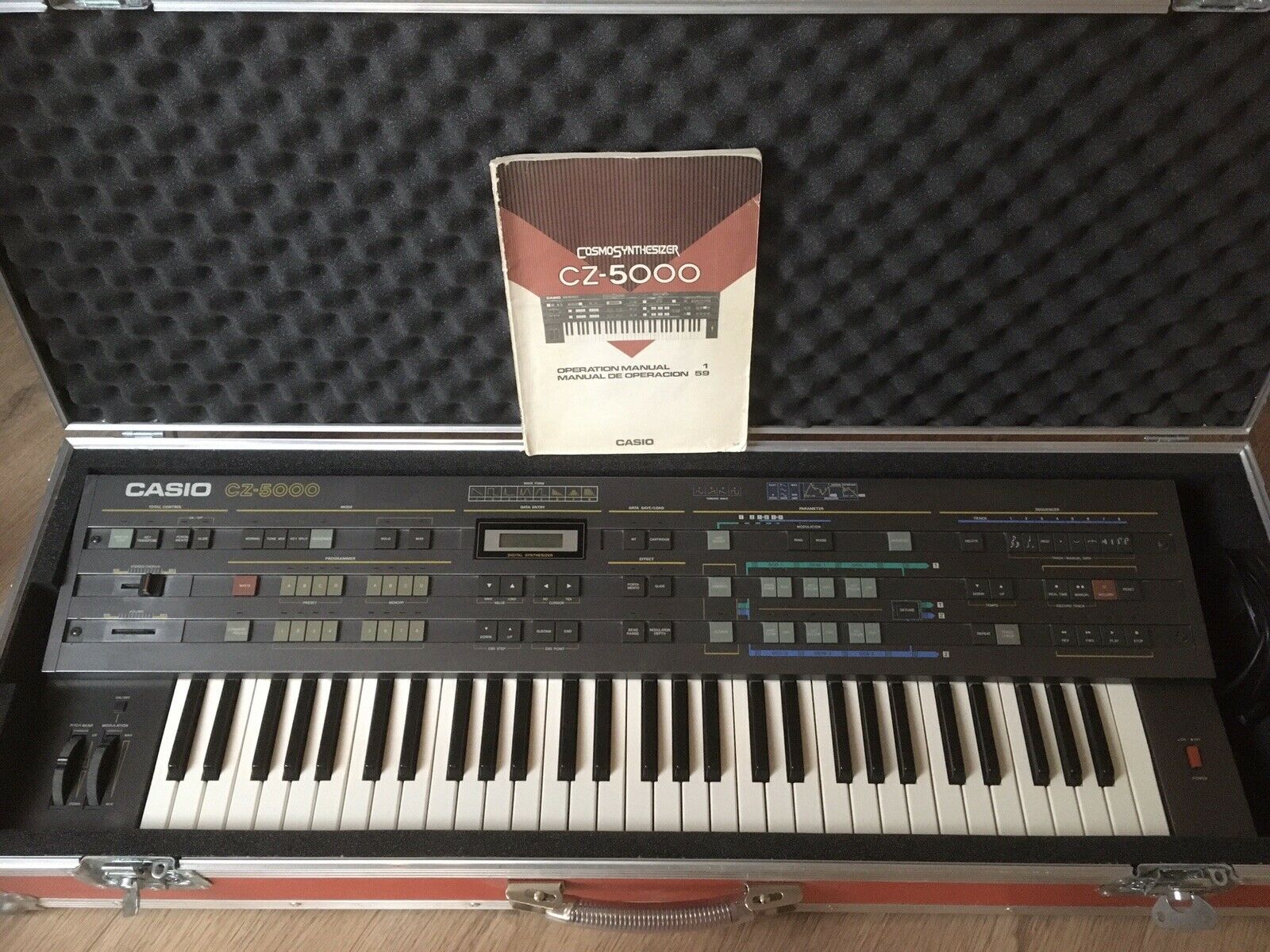 An amazing synth that sounds wonderful. It has a really rich full sound that puts most soft synths to shame, especially with the chorus engaged which really opens up the sound.

Cosmetically it’s in very good condition other than some light markings. Sadly I’ve lost one if the sliders but I’m hoping it will turn up at some point in which case I’ll forward on but I can’t promise anything.” Click here to visit listing on eBay 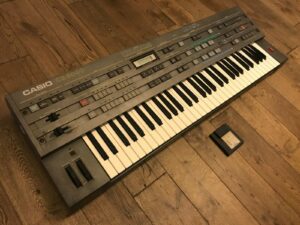 “Good overall aesthetic condition for its age, with some scratches and marks. The most notable scratches are on the bottom right corner of the sequencer section. The highest D key has a small chip. An experienced technician recently serviced this CZ-5K, and everything works as it should! Feel free to ask for more detailed photos if you’re interested.” Click here to visit listing on eBay 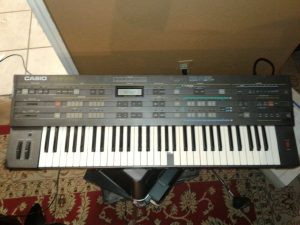 Has a broken key 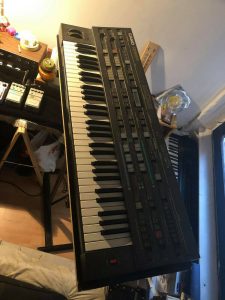 “In good working condition. Knobs are missing from the chorus and volume sliders and the vibrato button is missing. All three work though, and I imagine the first two should be replaceable. Odd nick here and there but in decent overall condition for its age. Used by The Orb and Jean-Michel Jarre according to this write-up, which gives some good background on the synth:” Click here to visit listing on eBay

“In good working condition. Knobs are missing from the chorus and volume sliders and the vibrato button is missing. All three work though, and I imagine the first two should be replaceable. Odd nick here and there but in decent overall condition for its age. Used by The Orb and Jean-Michel Jarre according to this write-up, which gives some good background on the synth:” Click here to visit listing on eBay 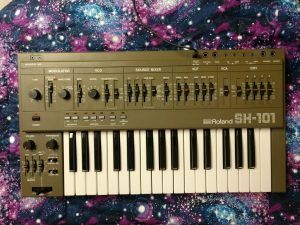 “HERE FOR AUCTION IS A CASIO CZ-5000 IN USED CONDITION 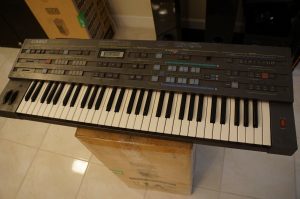 “You are bidding on Casio CZ-5000 Synthesizer Keyboard. Powers up and producing a sound. All keys are present and all in great condition and none are stick. All buttons are present and all working. All connections are original and all working. All lights come up. Missing one button, please look at the pictures. Screen works great. Missing a box, stand and manual. Please look at the pictures before bidding, you will get what you see in the pictures. ” Click here to visit listing on eBay 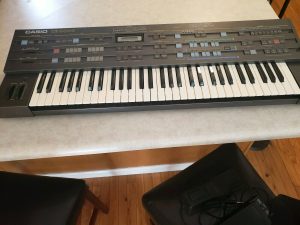 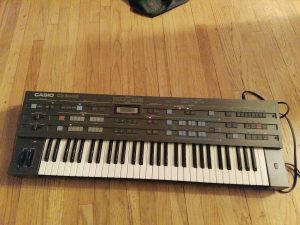 “Used Casio CZ-5000 Synthesizer keyboard in good working order. . Condition is Used. Nice shape inly damage that is visible is one key is chipped on bottom as pictured. Only tested as far as plugging in everything ligjts up when bottons pushed” Click here to visit listing on eBay 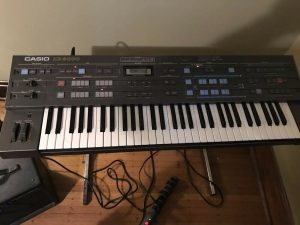 “I am not a synth player, but found this at a sale. I hooked it up to my son’s amp., and it works great. Had a lot of fun playing around with it. Comes with original, screw in stand.” Click here to visit listing on eBay 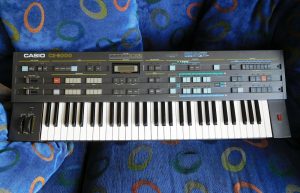 ” Very nice vintage Casio CZ-5000 digital synthesizer. The flagship of Casio’s professional line of Digital synths in the mid-1980’s, this is a surprisingly deep and unique synth. In very nice used condition – all sliders and buttons are there, all keyboard keys function. The paint and button markings are also very good. Very nice cosmetics in general, just some scuffing, smudges, light scratches and an area of speckling from use and age. With 2 original manuals (see pic), and even the original Casio carton. I have not tested all the functions (not sure how the sequencer is programmed, for example), so I can’t guarantee absolutely every control, but everything I have tried seems to be working fine.” Click here to visit listing on eBay

“Up for auction is a NICE Vintage Casio CZ-5000 Synthesizer KEYBOARD w/MIDI and new power cord! This keyboard is in great physical and working condition! It is very clean! All keys are in tact. It has those very unique classic Synthesizer sounds and combinations built in! The chorus slide control is missing the knob but still works and the battery cover on the back is missing. Minor things that don’t affect the performance of this awesome keyboard. It comes from a smokers free environment. Please refer to auction pictures prior to bidding. ” Click here to visit listing on eBay 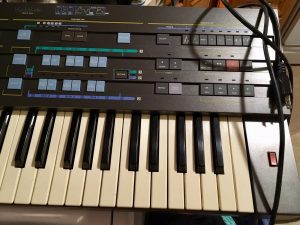 8 stage envelopes on the patches midi

phase distortion synthesizers produced by Casio in the mid-1980s.

“If you are looking at this you probably already know more about it than me; I’m only a guitarist

I’m selling this on behalf of the family of a friend who passed away earlier this year. I don’t know much about the programming of it etc but have fired it up in the studio and tested that it is working properly (the first patch I played did a great Van Halen Jump impression which took me right back to 1984!!!).

It is in decent condition for a 1980’s vintage synth that has been well used. There are the usual scuffs etc. The knob is missing from the Chorus slider and the batter cover is missing as can be seen in the photos but everything appears to be functioning properly.” Click here to visit listing on eBay

“Unique and powerful polysynth made in Japan, 1985. Excellent cosmetic and operational shape; no issues.

“The synth is still in working condition. Both volume & stereo chorus knobs are missing (but still can be moved along no problem) has some usage wear and minor scratching to the board. Has wear on the underside but no visible damage. No Box.” Click here to visit listing on eBay

Payment must be within 48 hrs.”
Click here to visit listing on eBay

“Used but working as far as I can tell. I was given this as a gift after expressing the desire to learn to play and instrument. I’ve spent more time trying to get all those pesky buttons set just right to produce a pleasing sound rather than learning to actually play something. So it’s time to find it a new home!

Due to the size and the lack of original packaging it is being offered for local pickup only.” Click here to visit listing on eBay

“This is one of the best phase distortion synths of the 80s and works and sounds fantastic. ” Click here to visit listing on eBay

“This keyboard has been in storage for many years and does have some issues but it does work, despite it being sold for parts not working. I’ll go into the issues now:

The keyboard powers up and is playable. The preset buttons work as do the volume and chorus faders as does the pitch bend and modulation wheels. I was also able to edit the sounds using the various other buttons but was unable to use the sequencer so this may be not be functioning properly. I didn’t try every single button on the keyboard but everyone I did try worked, other than above and also the data/save load cartridge buttons. I don’t know what they are for.

The L/R outputs work but are a bit temperamental and needed a wiggle to get a clean signal. The signal was then fine.

Some of the keys are only occasionally a bit squeaky when they are pressed, probably from being in storage for so long. This does not effect the output signal though.

There is some rust on the back of the unit (see photo). The battery compartment looks to be in pretty good condition although there is some oxidisation.

The unit comes with a power adapter and a wooden hardcase.

So, this will take a bit of attention to get working properly but it is usable and ultimately sounds wonderful.” Click here to visit listing on eBay

“Other than a few scratches (mostly underneath the keyboard), this unit is in good condition. The battery compartment cover (underneath the keyboard) and the plastic caps that go on the volume and stereo chorus sliders are missing, but the sliders themselves, as well as the rest of the synth, are fully functional.

I’m also going to be selling an expansion cartridge in a separate auction that gives you additional memory to store user programmed patches. This is a very rare item!” Click here to visit listing on eBay

”
This is a used CASIO CZ-5000 SYNTHESIZER. In good working shape. Was tested and sounds good. Plenty of fun for everyone!
Includes power cord. ” Click here to visit listing on eBay

Has some paint specks.

Has some paint specks.

“The CZ-5000 is in excellent condition as you can see in the photos. It is from a non smoking enviorment. Tested with headphones. ” Click here to visit listing on eBay

“The keyboard is in excellent condition given its age–the batteries for the sequencer probably need to be replaced, and the stereo chorus knob is missing, though the level is easily adjustable sans knob.” Click here to visit listing on eBay

“Classic Casio flagship digital synthesizer of the mid-’80s. It was purchased used but has been in my smoke-free, climate-controlled studio environment for over twenty years. It appears to work perfectly in every way that I have the expertise to test it. That includes all keys work, built-in pre-programmed sounds, programming sounds, loading and storing sounds on an external RAM card, etc. I never really learned to use the sequencer function, but messed around with it enough to believe that it is working correctly. The only defect besides many years of normal finger scuffing and scratches is a small chip in the lower front of one of the high keys. The slider controls for volume are just pegs, so there were probably knobs on them when it was new. They work just fine the way they are. ” Click here to visit listing on eBay