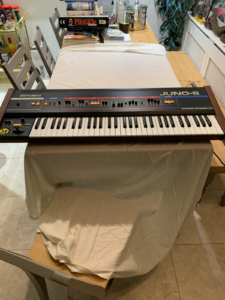 “I have owned this Synth for over 25 years a never really used it as requires midi clock to time up and I use midi modern control. It’s as rare as hens now but this one has a special twist in that I managed to get it signed by the Synth master Gary Numan back in 2017 when he came to Cardiff, a managed to get to meet him before his gig a pursuaded him to sign the end cap for me, to which he laughed a said he never been asked to sign a Synth before ! So this makes this even more unique as it’s probably the only one out there anywhere, and it’s a classic analogue from around start of the 80s when his early tracks used this type of machine !
I really regret having to sell this Synth but unfortunately it has to go as need the cash to pay towards other projects etc a lack of space as house is small !
It’s condition is really good considering it’s 40 odd years old, a still sounds great. The ends show some scuffs a wear etc a one lamp on the fascia doesn’t illuminate when selected which I’m tOld is as simple as a bulb, which I’m sure it is .
Anyway this is a valuable rare item a will only sell if reaches an acceptable sum given its rarity a provenance.” Click here to search for synths on eBay