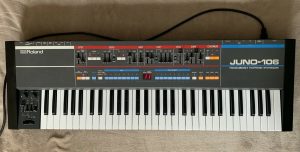 “I bought this 106 about four years ago when I was travelling in the USA. It wasn’t working well at the time but I brought it back to the UK with me and serviced it.

It was originally a 120v model. On inspection the transformer has a 240v input as well as 110v. So I re-soldered the power connecter to the the 240v input and its been happily working on UK mains since.

The other problem it had was a couple of the voices were cutting out. This is a common problem which I researched and was able to fix easily enough.

I removed the six voice chips and soaked them in acetate to remove the think rubber coating which was on them. I then added header boards to the main PCB and replaced the chips, since then everything has worked perfectly. The addition of the header boards means that the chips can be easily changed in the future without the need for a soldering iron.

Cosmetically all of the sliders and buttons are working, and the memory functions as it should.

All of the keys are working and the paint work is in good condition.

If you look at it in the light there is a misty sheen on the top surface, it’s as if someone cleaned it with a heavy duty cleaner which left a residue. I’ve tried wiping it down with IPA but that didn’t help and then decided to leave it as its hard to notice and didn’t bother me.

Included with the sale is a Gator semi hard gig bag which will protect the synth in transit. It’s quite heavy so I think postage will be £25. I’m based in Cardiff and if potential buyers would like to try the synth or pick it up after the auctions finished that’s fine with me.”
Click here to visit listing on eBay