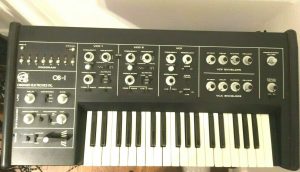 “Up for sale is perhaps Oberheim’s most undersung but amazing sounding monosynth. The OB-1 does not sound like a SEM, and it does not sound like one of their later polys–it has it’s own distinct sound and power that rivals any other monosynth from that era. Take the girth of an Octave Cat A-Rev. and apply some Oberheim filter flavor and you have an idea of what this sounds like.

This OB-1 is the first, and rarer, MKI version that has the very fast discrete envelopes (the later versions were grey like the OB-X and used a CEM 3310 envelope chip). It has both MIDI and the Tauntek CPU update that allows real-time editing of all parameters on saved patched, and an increased preset memory (using RAM instead of batteries). It has also been fully serviced by Bell Tone Synthworks here in Philadelphia and is ready to rock for the foreseeable future.” Click here to search for synths on eBay