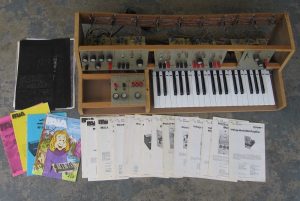 Paia Electronics made kit synthesizers in the 1970s. I believe this is a completely homemade copy of a 1970s Paia synthesizer. The builder bought their own components and built and soldered their own circuit boards. I think it might be a Paia 2720 copy.

Unlike the Paia components in the various spec sheets and catalogs included, none of these components have the Paia stamp or Pais graphics, as shown in the literature. Among the literature included are: a 1974 Paia catalog; a 1975 Paia booklet without record; a 1975 Paia schematics symbology booklet; 17 old Paia component booklets with specs (a couple are doubles); a 1972 “Using the Paia 2720 Synthesizer” booklet; and some other spec sheets, including some on clear mylar.

It is truly untested. I plugged it in. I found one button that made a light turn on, but, other than that, I have no idea about it. It was in a clean and dry house for the last decade or so.” Click here to search for synths on eBay