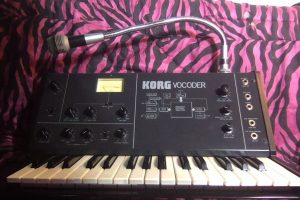 ” Have to reluctantly let this beauty go as i haveent budgeted for the holidays as well as i needed to, so here is an extremely rare and beautiful korg vc-10 you have the opportunity to have in your collection. The first thing I would like to note is it has the original microphone that came with the unit stock. This is a piece that is commonly lost over the years and has a special connector so no other goose neck style mic will fit in the jack on the top. IOt is similar to xlr but slightly bigger in all dimensions. Another mic can be used in the “mic input” jack if needed but I have always been completely satisfied with the stock one. This vocoder is a 20 band vocoder so it has 20 individual vioces that can be played at one time. that’s twice as many fingers as one has to use so you cam get very creative.
The ts and trs jacks are as follows, Mic input,final out,phones,ext signal input (Which is very cool as you can plug another synth in and use it’s tone for the vocoder. And last input is “ext pitch control which can be used to control pitch with another device. Then Knobs are as follows from left to right. Tune, Octave (which is a 2 mode switch regular and “up”. Up will make the processed channel of then voice an octave higher. then bottom right is accent bend. Next roe has “input signal balance” and below that are 2 knobs in a row to control vibrato speed and depth. Next column in two switches meter select where you can use the UV meter which is so cool that this unit has a uv meter. The switch below is ensemble “on and off”. Next knob opver is mic level which is a pre amp to the mic. below that is ext pitch control where another keyboard can be used to operate the vocoder. The final row has three knobs”power/final voliume which is pretty self explanatory. Below that is a knob which controls balance between simulator and mic and simulator. This is a “wet to dry control” Last of all is phones level,. Which is pretty self explanatory
The keyboard is a 2.5 octave control and also has a pitch bend on the left side. ”
Click here to search for synths on eBay