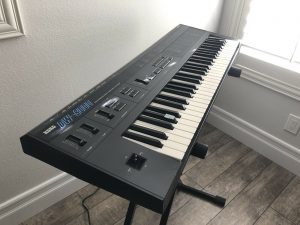 “This unit has been cleaned on the inside and has a new 2032 Battery holder for new batteries in the future so no more de-soldering. It comes with a power supply. The synthesizer itself works great but it has a few minor problems listed below. Unfortunately, due to these issues I am going to have sell this “As-is”.

The left corner is banged up and I suspect it was dropped sometime in its lifetime but it doesn’t seem to have damaged any boards inside. Damage is shown in pictures.

I have had some audio issues with the PHONES output but they usually stop after the unit has been on for awhile so I’m hesitant to replace it completely. I suspect this was also caused by the drop on the left corner. The best way to record or play would be to use both the L/R jacks. Haven’t had any issues using it like that

Finally, it has 2 broken (not dead) keys which I put tape on in the picture. I put them on the low and high G# since I play those keys the least, but you’d be able to put them anywhere a black key goes. If some black keys pop up online before this sells I will replace them, but as of yet, no luck. This synth does take midi so you can use something to control it if you like.” Click here to visit listing on eBay