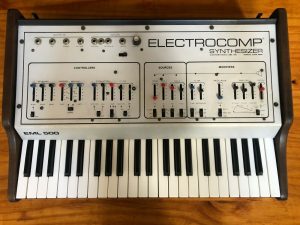 ” This is one of the coolest pieces of gear my dad ( original owner ) had! This is a super rare Electrocomp EML-500, only 300 were ever made ( compared to the EML-1* series where 1000 were made ) and rumor has it there’s far less still in existence. I don’t know how to gauge “perfect working condition” in these old synths, but I do know it powers on and I saw it played within the past few years.

It could use a little cleanup but is overall in nice condition with one major flaw. One of the slider top pegs has broken off ( shown in photos ) The tops are a little plastic cap that goes over a plastic peg, and the peg snapped off some time ago. This could be a really easy repair for someone who is handy with epoxy, as the two pieces fit clean together and the small plastic peg could be removed from the cap and glued back to the other piece. Beyond that, some of the markings have started to wear, there’s a little rub of the steel finish in a spot or two, and the wood has some marks on the back ( also shown ). Remainder of wood is actually nice with only minor flaws. If refurbished, this would truly be a show piece.” Click here to search for synths on eBay